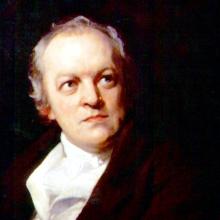 William Blake was born in London on November 28, 1757. As a child, Blake claimed he saw visions from God; around nine years old he spoke of seeing a tree filled with angels while walking through the countryside. One year later, Blake expressed his desire to become a painter and his parents sent him to drawing school; two years later he began writing poetry. In 1782, he married an illiterate woman named Catherine Boucher whom he taught how to read and write and later helped him print his poetry. Blake believed that his poetry could be read and understood by common people, but he was determined not to sacrifice his vision in order to become popular and the final years of his life he spent in great poverty.

When matched to William Blake, it means that similarities have been found between your poetic style and the themes and literary techniques typically seen in works by this famous poet. For example, you might use powerful alliteration and strong imagery the same way that Blake does. Recognizing these similarities is important because it gives you information about the history of your poetic style, which poets might inspire you, and what writing techniques you should try next.

Try using imagery and alliteration more often. You might also like experimenting with strong symbolism involving nature/animals and themes involving radical ideas like revolution and repression/oppression.