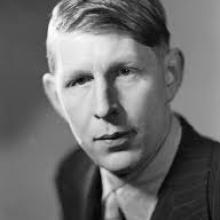 Wystan Hugh Auden was born in York, England, on February 21, 1907. Auden moved to Birmingham during childhood and was educated at Christ Church, Oxford. He was influenced by the poetry of Thomas Hardy and Robert Frost, as well as William Blake, Emily Dickinson, Gerard Manley Hopkins, and Old English verse. In 1928, his collection Poems was privately printed, but it wasn’t until 1930, when another collection titled Poems was published, that Auden was established as the leading voice of a new generation. Auden visited Germany, Iceland, and China, served in the Spanish Civil war, and in 1939 moved to the United States, where he met his lover, Chester Kallman, and became an American citizen. Auden served as a chancellor of the Academy of American Poets from 1954 to 1973, and divided most of the second half of his life between residences in New York City and Austria.

When matched to W.H. Auden, it means that similarities have been found between your poetic style and the themes and literary techniques typically seen in works by this famous poet. For example, you might use hyperbole and strong imagery the same way that Auden does. Recognizing these similarities is important because it gives you information about the history of your poetic style, which poets might inspire you, and what writing techniques you should try next.

Try using metaphor and symbolism more often. You might also like experimenting with personification and including themes such as love and loss into your works.