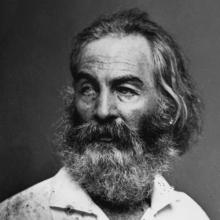 Walt Whitman was born in West Hills, New York on May 31, 1819 and lived with 8 other siblings in Brooklyn and Long Island in the 1820s and 1830s. As a child Whitman's love for reading and writing arose from his job as a printer in which he was mainly self-taught. In 1836, he taught on Long Island at the age of 17 and continued to teach until 1841 where he pursued journalism. After the Civil War, Whitman visited the wounded at New York City–area hospitals and traveled to Washington, D. C. in December 1862 to care for his brother who had been wounded in the war.

When matched to Walt Whitman, it means that similarities have been found between your poetic style and the themes and literary techniques typically seen in works by this famous poet. For example, you might use disorganized structure (free verse) and strong rhythm the same way that Whitman does. Recognizing these similarities is important because it gives you information about the history of your poetic style, which poets might inspire you, and what writing techniques you should try next.

Try using imagery, repetition, and metaphor more often. You might also like experimenting with a more distinctive voice and a strong emphasis on the individual self while using simple language.