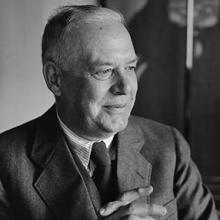 Wallace Stevens was born in Reading, Pennsylvania, on October 2, 1879. He spent his early life studying law and he practiced law in New York City until 1916. In 1914, under the pseudonym Peter Parasol,"he wrote a group of poems under the title Phases that would eventually go on to be published in Poetry magazine. His first official book of poems, Harmonium, was published in 1923 and exhibited influence of both the English Romantics and the French symbolists. He didn't recieve widespread recogintion until a year before his death in 1955 when he published Collected Poems.

When matched to Wallace Stevens, it means that similarities have been found between your poetic style and the themes and literary techniques typically seen in works by this famous poet. For example, you might use powerful metaphor or alliteration in the same way that Stevens does. Recognizing these similarities is important because it gives you information about the history of your poetic style, which poets might inspire you, and what writing techniques you should try next.

Try using irony and personification more often. You might also like experimenting with using iambic pentameter and regular rhythm.