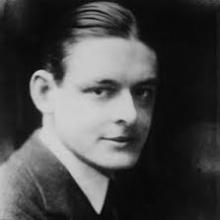 Thomas Stearns Eliot was born in St. Louis, Missouri, on September 26, 1888. For the first eighteen years of his life he lived in St. Louis and went on to attend Harvard University. In 1910, he left the United States for the Sorbonne, having earned both undergraduate and masters degrees and having contributed several poems to the Harvard Advocate. Eliot became a British citizen in 1927; long associated with the publishing house of Faber & Faber, he published many younger poets, and eventually became director of the firm. Eliot separated from his first wife in 1933, and remarried Valerie Fletcher in 1956. In 1948, T. S. Eliot received the Nobel Prize for Literature. He died in London on January 4, 1965.

When matched to T. S. Eliot, it means that similarities have been found between your poetic style and the themes and literary techniques typically seen in works by this famous poet. For example, you might use powerful allusion and strong imagery the same way that Eliot does. Recognizing these similarities is important because it gives you information about the history of your poetic style, which poets might inspire you, and what writing techniques you should try next.

Try using symbolism and vivid imagery more often. You might also like experimenting with allegories involving regular objects as well as abstract concepts like "the soul".