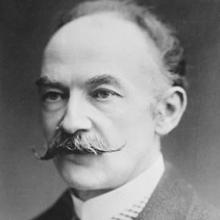 Thomas Hardy was born in Dorset, England, on June 2, 1840. He studied and became an architect, but after 1871 he found success in writing novels and left the field of architecture altogether. Some of his more respected novels today, including Tess of the D’Urbervilles and Jude the Obscure, received a lot of negative feedback when they were first published. He left fiction writing for poetry, and published 8 collections. Much of his poetry focuses on the bleakness of the human condition. Hardy had a highly original style, combining rough-hewn rhythms and colloquial diction with an extraordinary variety of meters and stanzaic forms. He died on January 11, 1928.

When matched to Thomas Hardy, it means that similarities have been found between your poetic style and the themes and literary techniques typically seen in works by this famous poet. For example, you might use simile or alliteration in the same way that Gardy does. Recognizing these similarities is important because it gives you information about the history of your poetic style, which poets might inspire you, and what writing techniques you should try next.

Try using assonance and rhyme scheme more often. You might also like experimenting with irony and themes involving isolation and alienation.