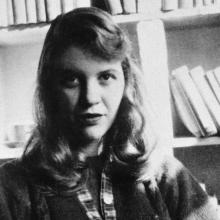 Sylvia Plath was born in Boston, Massachusetts on October 27, 1932. When Plath was eight years old her strict father died from diabetes and his death influenced one of her most famous works, "Daddy". From an early age, Plath was driven to succeed and kept a journal from the age of eleven and published her poems in regional magazines and newspaper. After graduation from Smith College, Plath moved to Cambridge, England, on a Fulbright Scholarship and married English poet Ted Hughes in 1956. After moving back to Massachusetts in 1957 and bearing two children in the years of 1960 and 1962 in that same year her husband left her for Assia Gutmann Wevill. In the winter of 1962, heartbroken and depressed, Plath wrote most of the poems that would make up her book "Ariel". On February 11, 1963, Plath wrote a note to her downstairs neighbor instructing him to call the doctor, then she died by suicide using her gas oven.

When matched to Sylvia Plath, it means that similarities have been found between your poetic style and the themes and literary techniques typically seen in works by this famous poet. For example, you might use powerful assonance and strong rhyme scheme the same way that Plath does. Recognizing these similarities is important because it gives you information about the history of your poetic style, which poets might inspire you, and what writing techniques you should try next.

Try using assonance and rhyme scheme more often. You might also like experimenting with feminist themes involving the downfall of the patriarchy or progressive thoughts involving a spin on death and loss.