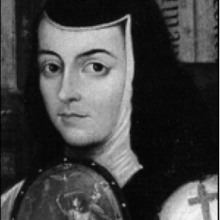 Sor Juana Inés de la Cruz was born in San Miguel Neplantla, Mexico on November 12, 1651. She wrote her first poem at 8 years old—at the same time her grandfather died, and she was sent to live in Mexico City with her aunt. She wanted to go to university but as a woman, was not permitted to do so. She continued to study privately until 1669 at the age of 21, when she entered the Convent of the Order of St. Jérôme, where she would remain until her death. In 1680, unbeknowst to Sor Juana, a letter of hers which critized a well-known Jesuit sermon recieved harsh criticsm, to which Juana replied back to. The response, now deemed Respuesta a Sor Filotea has been hailed as the first feminist manifesto, defending, among other things, a woman’s right to education. She was eventually required to sell all of her books and stop writing entirely. In 1695 a plague hit the convent and Juana died from the disease at the age of 44.

When matched to Sor Juana Inés de la Cruz, it means that similarities have been found between your poetic style and the themes and literary techniques typically seen in works by this famous poet. For example, you might use rhyme scheme and hyperbole the same way that Inés de la Cruz, does. Recognizing these similarities is important because it gives you information about the history of your poetic style, which poets might inspire you, and what writing techniques you should try next.

Try using stronger imagery and symbolism more often. You might also like experimenting with lyrical poetry and the usage of witty wordplay and contrasts.