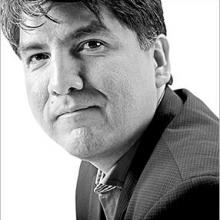 Sherman Alexie was born on the Spokane Indian Reservation in Wellpinit, Washington on October 7, 1966. He earned a BA in American studies during his time at Washington State University in Pullman. Some of his most notable poetry includes Face, The Man Who Loves Salmon, and The Business of Fancydancing. In addition to poetry, Alexie also wrote short fiction novels including The Absolutely True Diary of a Part-Time Indian in 2007, which won the National Book Award for Young People’s Literature. His work earned him a spot as one of 20 Best American novelists ender the age of 40 in Granta magazine. He is a 3x world heavyweight poetry slam champion and currently lives in Seattle, Washington with his wife and son.

When matched to Sherman Alexie, it means that similarities have been found between your poetic style and the themes and literary techniques typically seen in works by this famous poet. For example, you might use allusion or vivid imagery in the same way that Alexie does. Recognizing these similarities is important because it gives you information about the history of your poetic style, which poets might inspire you, and what writing techniques you should try next.

Try using irony and synecdoche more often. You might also like experimenting with using paradoxes, parallelism, and dark humor.