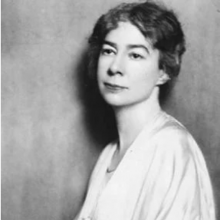 Sara Trevor Teasdale was born in St. Louis, Missouri on August 8, 1884. She was home schooled but traveled frequently to Chicago. Teasdale published Sonnets to Duse, and Other Poems, her first volume of verse, in 1907. Her second collection, Helen of Troy, and Other Poems, followed in 1911, and her third, Rivers to the Sea, in 1915. She married and moved to New York City in 1916, where she won the Columbia University Poetry Society Prize. Teasdale’s work had always been characterized by its simplicity and clarity, her use of classical forms, and her passionate and romantic subject matter. She died in 1993 after comitting suicide.

When matched to Sara Teasdale, it means that similarities have been found between your poetic style and the themes and literary techniques typically seen in works by this famous poet. For example, you might use alliteration or strong imagery in the same way that Teasdale does. Recognizing these similarities is important because it gives you information about the history of your poetic style, which poets might inspire you, and what writing techniques you should try next.

Try using rhyme scheme and personification more often. You might also like experimenting with diifferent structures and rhythms/rhymes to further strengthen your poetry.