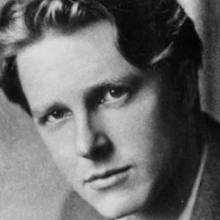 Rupert Chawner Brooke was born in Warwickshire, England on August 3, 1887. By age 14, he had won the school poetry prize due to his love of verse. Brooke published his first poems in 1909; his first book, Poems, appeared in 1911. In 1912 he compiled an anthology entitled Georgian Poetry with Edward Marsh. The Georgian poets wrote in an anti-Victorian style, using rustic themes and subjects such as friendship and love. After experiencing a mental breakdown in 1913, he traveled abroad and wrote essays about his impressions for the Westminster Gazette, which were collected in Letters From America. Once he returned, he enlisted in the Royal Naval Division. Unfortunately, he got blood poisioning from a mosquito while on an expedition, and was buried on the island of Skyros in the Aegean Sea.

When matched to Rupert Brooke, it means that similarities have been found between your poetic style and the themes and literary techniques typically seen in works by this famous poet. For example, you might use alliteration or strong metaphor in the same way that Brooke does. Recognizing these similarities is important because it gives you information about the history of your poetic style, which poets might inspire you, and what writing techniques you should try next.

Which Writing Techniques Should You Try Next?
Try using personification and repetition more often. You might also like experimenting with writing poetry in traditional sonnet structure and using altered syntax.
Make sure to check out poets.org for more information!
Register