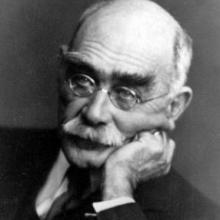 Joseph Rudyard Kipling was born in Bombay, India on December 30, 1865. He began his education in England but it was a tough transition as he suffered feelings of abandonment and confusion after living a pampered lifestyle as a colonial in India. He returned when he was 17 to work and published his first collection of verse, Departmental Ditties and Other Verses, in 1886. Kipling married and moved to Vermont in 1892 where he published two Jungle Books. He and his family moved to Sussex permanently in 1902, where he focused on writing poetry and short stories for the remainder of his life. He died on January 18, 1936.

When matched to Rudyard Kipling, it means that similarities have been found between your poetic style and the themes and literary techniques typically seen in works by this famous poet. For example, you might use alliteration or repetition in the same way that Kipling does. Recognizing these similarities is important because it gives you information about the history of your poetic style, which poets might inspire you, and what writing techniques you should try next.

Try using personification and repetition more often. You might also like experimenting with writing poetry involving themes of political elements and childhood (to adulthood).