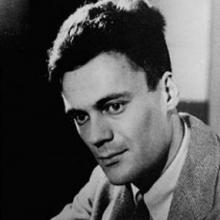 Robert Lowell was born in Boston, Massachusetts on March 1, 1917 into one of the city's oldest and most prominent families. He attended both Harvard and Kenyon College where he studied poetry. He received a Pulitzer Prize in 1947 at the age of 30, for his second book, Lord Weary’s Castle. His early books were influenced by his conversion from Episcopalianism to Catholicism and explored the dark side of America’s Puritan legacy. He was very politically involved as an objector of World War II and active protester of the Vietnam War. His personal life was filled with severe episodes of manic depression, for which he was repeatedly hospitalized. He died unexpectedly of a heart attack on September 12, 1977 at the age of 60.

When matched to Robert Lowell, it means that similarities have been found between your poetic style and the themes and literary techniques typically seen in works by this famous poet. For example, you might use allusions or meter in the same way that Lowell does. Recognizing these similarities is important because it gives you information about the history of your poetic style, which poets might inspire you, and what writing techniques you should try next.

Try using rhyme scheme and allusion more often. You might also like experimenting with a multiplicity of forms and styles in your poetry.