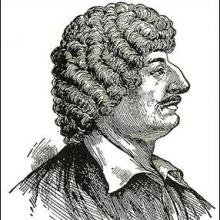 Robert Herrick was born in London, UK on August 24, 1591. His father died when he was just 14 months old. He studied at Saint John's College and graduated in 1617. He wrote 5 poems over the next decade beofore becoming a vicar of Dean Prior in Devonshire. Due to his profession he never married. Many of the women mentioned thoughout his poems are thought to have been fictional. His entire collection contains over 1200 short poems ranging in form from epistles and eclogues to epigrams and love poems. His work was most influenced by classical Roman poetry.

When matched to Robert Herrick, it means that similarities have been found between your poetic style and the themes and literary techniques typically seen in works by this famous poet. For example, you might use metaphor or allusion in the same way that Herrick does. Recognizing these similarities is important because it gives you information about the history of your poetic style, which poets might inspire you, and what writing techniques you should try next.

Try using alliteration and personification more often. You might also like experimenting with writing about themes involving village life and love.