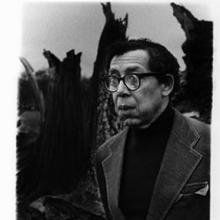 Robert Hayden was born Asa Bundy Sheffey in Detroit on August 4, 1913. He had a rough childhood and a vision impairment that renderedhim unable to play sports with other kids but did allow him to spend much time reading. He earned a scholarship and went on to study at Detroit City College. His first book of poems, Heart-Shape in the Dust, was published in 1940. He received a graduate degree from University of Michigan and after became the first black member of the English department as a teaching fellow. his poetry gained national recognition in the 1960s when he was awarded a prize for his book Ballad of Remembrance. He went on to receive the Academy of American Poets fellowship in 1975 and became the first black American to be appointed as Poet Laureate to the Library of Congress a year later. He died in Michigan in 1980.

When matched to Robert Hayden, it means that similarities have been found between your poetic style and the themes and literary techniques typically seen in works by this famous poet. For example, you might use alliteration or metaphor in the same way that Hayden does. Recognizing these similarities is important because it gives you information about the history of your poetic style, which poets might inspire you, and what writing techniques you should try next.

Try using contrast and repetition more often. You might also like experimenting with a range of different poetic dictions and ironic speech.