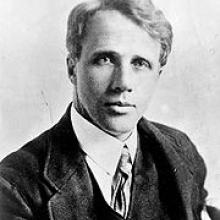 Robert Frost was born in San Francisco, California on March 26, 1974 where his family had moved from Pennsylvania. At eleven years old Frost's father died from tuberculosis and he moved with his mother and sister to Lawrence Massachusetts. During his high school years in Lawrence he became interested in writing and reading poetry. In 1895, Frost married Elinor Miriam White, who became a significant inspiration for his poetry up until her death in 1938. By the 1920s, he was considered the most celebrated poet in America after having published several books and winning 4 Pulitzer Prizes.

When matched to Robert Frost, it means that similarities have been found between your poetic style and the themes and literary techniques typically seen in works by this famous poet. For example, you might use strong allusion or expressive imagery the same way that Frost does. Recognizing these similarities is important because it gives you information about the history of your poetic style, which poets might inspire you, and what writing techniques you should try next.

Try using imagery, allusion, and metaphor more often. You might also like experimenting with more rhythmic syntax and deeper symbolism.