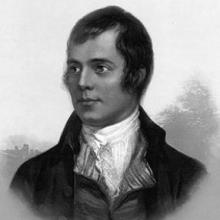 Robert Burns was born in Alloway, Scotland, on January 25, 1759. He was homeschooled and lost his father by a young age, taking over his farm and all of the debt that he left behind. He wrote his first poem at age 15 after falling in love and would go on to have 14 children. His first book of poetry, Poems, Chiefly in the Scottish Dialect, was printed in 1786 and paid for by subscriptions. He spent the last decade of his life editing and imitating traditional folk songs foran anthology entitled The Scots Musical Museum. These volumes preserved parts of Scotland’s cultural heritage and popular songs. Heart diesease killed Burns at the age of 37, the very same day his last son would be born.

When matched to Robert Burns, it means that similarities have been found between your poetic style and the themes and literary techniques typically seen in works by this famous poet. For example, you might use simile or hyperbole in the same way that Burns does. Recognizing these similarities is important because it gives you information about the history of your poetic style, which poets might inspire you, and what writing techniques you should try next.

Try using vivid imagery and repetition more often. You might also like experimenting with using a more spontaneous, direct, and sincere style of poetry.