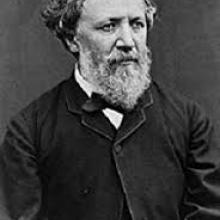 Robert Browning was born in Camberwell, England on May 7, 1812. Browning's father was a collector of books and pictures and housed more than 6,000 volumes of works in Greek, Hebrew, Latin, French, Italian, and Spanish. By the age of five, it is believed that Browning was already proficient at reading and writing. In 1828, Browning enrolled at the University of London, but he soon left, anxious to read and learn at his own pace. In 1833, Browning anonymously published his first major published work, Pauline, and in 1840 he published Sordello, which was widely regarded as a failure. In 1844, Browning read Elizabeth Barrett’s poems and corresponded with her and officially met her in 1845. The two were married in 1846, and moved to Pisa and then Florence, where they continued to write. Browning was awarded honorary degrees by Oxford University in 1882 and the University of Edinburgh in 1884. In 1889, Robert Browning died on the same day that his final volume of verse, Asolando: Fancies and Facts, was published.

When matched to Robert Browning, it means that similarities have been found between your poetic style and the themes and literary techniques typically seen in works by this famous poet. For example, you might use alliteration and strong imagery the same way that Browning does. Recognizing these similarities is important because it gives you information about the history of your poetic style, which poets might inspire you, and what writing techniques you should try next.

Try using assonance and symbolism more often. You might also like experimenting with dramatic monlogues and stirring themes involving violence and death.