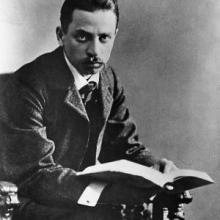 Rainer Maria Rilke was born in Prague on December 4, 1875. Rilke was the only child of an unhappy marriage and his childhood was also unhappy; his parents placed him in military school with the desire that he become an officer. With the help of his uncle, Rilke left the military academy and entered a German preparatory school. By the time he enrolled in Charles University in Prague in 1895, he knew that he would pursue a literary career: he had already published his first volume of poetry, Leben und Lieder, the previous year. In 1896, Rilke decided to leave the university for Munich, Germany, and later made his first trip to Italy. In 1897, Rilke went to Russia, a trip that would prove to be a milestone in Rilke’s life, and which marked the true beginning of his early serious works. Rilke continued to travel throughout his lifetime; to Italy, Spain and Egypt among many other places, but Paris would serve as the geographic center of his life, where he first began to develop a new style of lyrical poetry, influenced by the visual arts. Rilke died of leukemia on December 29, 1926 and at the time of his death his work was intensely admired by many leading European artists, but was almost unknown to the general reading public.

When matched to Rainer Maria Rilke, it means that similarities have been found between your poetic style and the themes and literary techniques typically seen in works by this famous poet. For example, you might use hyberbole or alliteration in the same way that Rilke does. Recognizing these similarities is important because it gives you information about the history of your poetic style, which poets might inspire you, and what writing techniques you should try next.

Try using strong imagery and symbolism more often. You might also like experimenting with tone evoking themes of love and freedom.