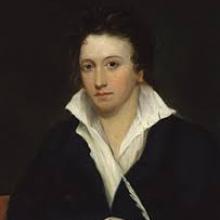 Percy Bysshe Shelley was born at Field Place, near Horsham, Sussex, England in August 4, 1792. Shelley attended Eton College for six years beginning in 1804, and then went on to Oxford University. While at Eton he began to write poetry but his first publication was a Gothic novel, Zastrozzi (1810). At age nineteen, Shelley eloped to Scotland with sixteen-year-old Harriet Westbrook and moved to the Lake District of England to study and write. In 1817, Shelley produced Laon and Cythna, a long narrative poem that, was withdrawn after only a few copies were published for including attacks on religion. On July 8, 1822, Shelley was drowned in a storm while attempting to sail from Leghorn to La Spezia, Italy, in his schooner, the Don Juan.

When matched to Percy Bysshe Shelley, it means that similarities have been found between your poetic style and the themes and literary techniques typically seen in works by this famous poet. For example, you might use powerful metaphor and hyperbole the same way that Shelley does. Recognizing these similarities is important because it gives you information about the history of your poetic style, which poets might inspire you, and what writing techniques you should try next.

Try using synecdoche and irony more often. You might also like experimenting with symbolism involving themes of tyranny/power and injustice.