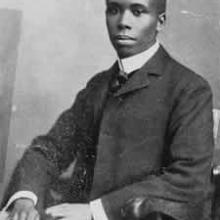 Paul Laurence Dunbar was born in Dayton, Ohio on June 27, 1872. Dunbar was one of the first African American poets to gain national recognition and his parents Joshua and Matilda Murphy Dunbar were freed slaves from Kentucky. By the age of fourteen, Dunbar had poems published in the Dayton Herald. In 1893, Dunbar self-published a collection called Oak and Ivy and moved to Chicago, hoping to find work at the first World’s Fair. William Dean Howells gave a favorable review to Dunbar's second collection of poems in Harper’s Weekly, and in 1897 he embarked on a six-month reading tour of England. In 1898, Dunbar’s health deteriorated and he left his job to dedicate himself full time to writing and giving readings.

When matched to Paul Laurence Dunbar, it means that similarities have been found between your poetic style and the themes and literary techniques typically seen in works by this famous poet. For example, you might use metaphor and strong imagery the same way that Dunbar does. Recognizing these similarities is important because it gives you information about the history of your poetic style, which poets might inspire you, and what writing techniques you should try next.

Try using rhyme scheme and figurative language more often. You might also like experimenting with personification and themes incloving race and injustice.