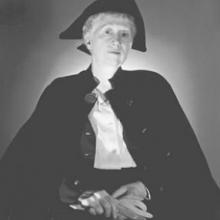 Marianne Moore was born near St. Louis, Missouri, on November 15, 1887. She studied typing in school until her and her mother moved to New York City and in 1921 she became an assistant at the New York Public Library. She began to meet other poets and in 1921 her first book, Poems, was published without her knowledge. She became widely recognized for her work and was particularly fond of animals as illustrated by much of the imagery in her writing being drawn from the natural world. She died in New York City in 1972.

When matched to Marianne Moore, it means that similarities have been found between your poetic style and the themes and literary techniques typically seen in works by this famous poet. For example, you might use powerful metaphor or assonance in the same way that Moore does. Recognizing these similarities is important because it gives you information about the history of your poetic style, which poets might inspire you, and what writing techniques you should try next.

Try using irony and simile more often. You might also like experimenting with themes involving nature and transformation.