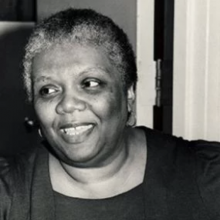 Lucille Clifton was born in Depew, New York, on June 27, 1936. Her debut book of poems, Good Times, recieved a Best Book of the Year title by the New York Times. Clifton was the author of Generations: A Memoir and more than 16 books for children, written specifically for an African-American audience. Her honors include an Emmy Award from the American Academy of Television Arts and Sciences, a Lannan Literary Award, 2 fellowships from the National Endowment for the Arts, the Shelley Memorial Award, the YM-YWHA Poetry Center Discovery Award, and the 2007 Ruth Lilly Prize. She passed away due to cancer on Feburary 13th, 2010.

When matched to Lucille Clifton, it means that similarities have been found between your poetic style and the themes and literary techniques typically seen in works by this famous poet. For example, you might use powerful imagery or simile in the same way that Clifton does. Recognizing these similarities is important because it gives you information about the history of your poetic style, which poets might inspire you, and what writing techniques you should try next.

Try using assonance and repetition more often. You might also like experimenting with parallel structure and tonal variation.