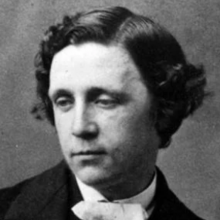 Lewis Carroll was born Charles Lutwidge Dodgson in Daresbury, Cheshire, England on January 27, 1832. After gradaduating from Christ Church College, he remained there to teach. His mathematical writings include An Elementary Treatise on Determinants (1867), Euclid and His Modern Rivals (1879), and Curiosa Mathematica (1888). It was at this time he began to dabble in photography and public speaking, but abandonded both in 1880 to focus more on his writing. He primarily wrote comic fantasies and humorous verse that was often very childlike. Carroll published his novel Alice’s Adventures in Wonderland in 1865, followed by Through the Looking Glass in 1872. He died in Guildford, Surrey, on January 14, 1898.

When matched to Lewis Carroll, it means that similarities have been found between your poetic style and the themes and literary techniques typically seen in works by this famous poet. For example, you might use allusion or strong imagery in the same way that Carroll does. Recognizing these similarities is important because it gives you information about the history of your poetic style, which poets might inspire you, and what writing techniques you should try next.

Try using symbolism and personification more often. You might also like experimenting with imaginative settings and bright and contrasting characters.

Make sure to check out poets.org for more information!
Register