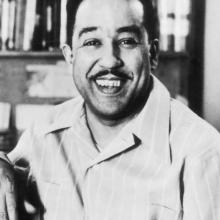 James Mercer Langston Hughes was born in Joplin, Missouri on February 1, 1902. At an early age his parents were separated and he moved with his mother and her husband to Lincoln, Illinois where he developed a love for writing poetry. After graduating high school he spent a year studying at Columbia University and traveling to Africa and Europe as a seasman. Poets such as Paul Lawrence Dunbar, Carl Sandburg, and Walt Whitman were his main influences in the poetry as well as novels, short stories, and plays that he produced. Hughes' was especially important in shaping contributions during the Harlem Renaissance in the 1920s.

When matched to Langston Hughes, it means that it means that similarities have been found between your poetic style and the themes and literary techniques typically seen in work by this famous poet. For example, you might use heavy imagery or powerful rhyme scheme the same way that Hughes does. Recognizing these similarities is important because it gives you information about the history of your poetic style, which poets might inspire you, and what writing techniques you should try next.

Which Writing Techniques Should You Try Out Next?