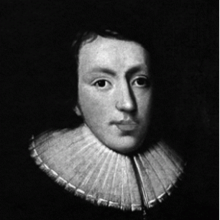 John Milton was born in London on December 9, 1608. Milton was educated at St. Paul’s School, then at Christ’s College, Cambridge, where he began to write poetry in Latin, Italian, and English, and prepared to enter the clergy. Milton abandoned his plans to join the priesthood and instead set out to be a poet. In May of 1638, Milton began a 13-month tour of France and Italy, during which he met many influential people, including the astronomer Galileo. During the English Civil War, Milton championed the cause of the Puritans and Oliver Cromwell, and wrote a series of pamphlets advocating radical political topics. After the Restoration of Charles II to the throne in 1660, Milton was arrested as a defender of the Commonwealth, fined, and soon released. Milton oversaw the printing of a second edition of Paradise Lost, his most popular poem, in 1674, and died shortly afterwards, on November 8, 1674, in Buckinghamshire, England.

When matched to John Milton, it means that similarities have been found between your poetic style and the themes and literary techniques typically seen in works by this famous poet. For example, you might use simile and strong imagery the same way that Milton does. Recognizing these similarities is important because it gives you information about the history of your poetic style, which poets might inspire you, and what writing techniques you should try next.

Try using oxymoron and symbolism more often. You might also like experimenting with using diction and tone to illustrate themes of faith and religion.