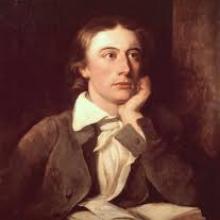 John Keats was born in London on October 31, 1795. Keats lost both his parents at a young age and was the oldest of four children. After his mother’s death, Keats’s maternal grandmother appointed two London merchants, Richard Abbey and John Rowland Sandell, as guardians. When Keats was fifteen, Abbey withdrew him from the Clarke School, to study medicine in a London hospital. In 1816, Keats became a licensed apothecary, but he never practiced his profession, and instead decided to write poetry.

When matched to John Keats, it means that similarities have been found between your poetic style and the themes and literary techniques typically seen in works by this famous poet. For example, you might use powerful assonance and strong imagery the same way that Keats does. Recognizing these similarities is important because it gives you information about the history of your poetic style, which poets might inspire you, and what writing techniques you should try next.

Try using alliteration and connation more often. You might also like experimenting with lyrical rhythm and expressive moods to create a unique writing style.