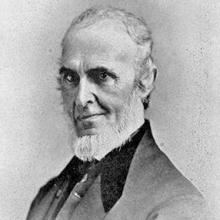 John Greenleaf Whittier was born in Haverhill, Massachusetts on December 17, 1807. His parents were both devout Quakers and he had very little formal schooling. He had his first poem published in 1826, “The Exile’s Departure." He supported himself thoughout school as a shoemaker and schoolteacher. He gained the attention of editors and abolitionists by the age of 20 and began working passionately for a series of abolitionist newspapers and magazines. He was involved in politics but has an unsuccessful run at a congressional seat in 1832. His first book was published the year prior but after Whittier focused mainly on essays, articles and poems. In 1834 he was elected as a Whig for one term to the Massachusetts legislature before founding the antislavery Liberty party in 1840. His most popular work, Snow-Bound was published in 1866 and sold more than 20,000 copies. He died in Hampton Falls, New Hampshire, in September, 1892.

When matched to John Greenleaf Whittier, it means that similarities have been found between your poetic style and the themes and literary techniques typically seen in works by this famous poet. For example, you might use simile or strong imagery in the same way that John Greenleaf Whittier does. Recognizing these similarities is important because it gives you information about the history of your poetic style, which poets might inspire you, and what writing techniques you should try next.

Try using rhyme scheme and personification more often. You might also like experimenting with developing your wiriting style based on the life/culture around you (much like Whittier's writing was inspired by rural life around him).