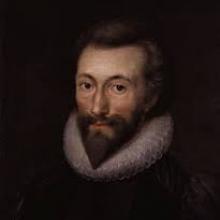 John Donne was born in London, England in 1572. Donne is primarily known as the founder of the Metaphysical Poets, a term created by Samuel Johnson, an eighteenth-century English essayist, poet, and philosopher. The Metaphysical Poets are known for their ability to startle the reader and coax new perspective through inventive syntax, and imagery from art, philosophy, and religion using an extended metaphor known as a conceit. Donne studied at both Oxford and Cambridge Universities in his early teen years and at age twenty he studied law at Lincoln’s Inn. Donne wrote most of his two major volumes of work: Satires and Songs and Sonnets in the 1590s. In 1621, Donne became dean of Saint Paul’s Cathedral and in his later years, Donne’s writing reflected his fear of his inevitable death.

When matched to John Donne, it means that similarities have been found between your poetic style and the themes and literary techniques typically seen in works by this famous poet. For example, you might use simile and strong imagery the same way that Donne does. Recognizing these similarities is important because it gives you information about the history of your poetic style, which poets might inspire you, and what writing techniques you should try next.

Try using metaphor and symbolism more often. You might also like experimenting with personification including themes of death and loss.