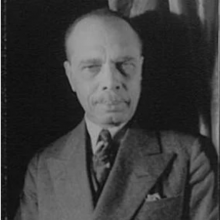 James Weldon Johnson was born in Jacksonville, Florida on June 17, 1871. After studying English literature and the European musical tradition at Atlanta University, Johnson became a high school principal in Jacksonville, Florida. He wrote the song “Lift Every Voice and Sing” in 1900 in honor of Lincoln's birthday and had immense popularity in the African American community. He then moved to New York for a short time before becoming a U.S. consul to Venezuela. During this time, he had his poems published in The Century Magazine and The Independent. In 1920 he became the national organizer for the National Association for the Advancement of Colored People (NAACP) where he edited The Book of American Negro Poetry that became a major contribution to the history of African-American literature. Johnson died on June 26th, 1938.

When matched to James Weldon Johnson, it means that similarities have been found between your poetic style and the themes and literary techniques typically seen in works by this famous poet. For example, you might use strong metaphor or simile in the same way that Johnson does. Recognizing these similarities is important because it gives you information about the history of your poetic style, which poets might inspire you, and what writing techniques you should try next.