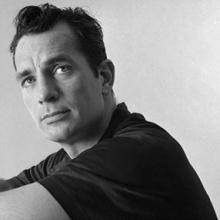 Jack Kerouac was born in Lowell, Massachusetts, on March 12, 1922. He spoke French-Canadian until he earned English at age 5. He studied at several institutions including the Horace Mann School in New York City, The New School, and was awarded scholarships to Boston University, University of Notre Dame, and Columbia University. An injury lead to him dropping out of school and joining the US Navy for 8 days before being honorably discharged on psychiatric grounds. He was then involved in a murder and arrested but worked out a deal with Edie Parker to marry her in exchange for financial support to get out of jail. When that didn't go as planned, Kerouac wound up moving back to New York and living with his family. He wrote his first novel, The Town and the City, in 1950. However it wasn't until he published On the Road in 1957 that he saw immense success and garnered celebrity status as a major American author. His poetry, although not as well known, was associated with the Beat movement. Kerouac died from a chronic liver disease on October 21, 1969 due to a lifetime of heavy drinking.

When matched to Jack Kerouac, it means that similarities have been found between your poetic style and the themes and literary techniques typically seen in works by this famous poet. For example, you might use allusion or powerful imagery in the same way that Kerouac does. Recognizing these similarities is important because it gives you information about the history of your poetic style, which poets might inspire you, and what writing techniques you should try next.

Try using imagery and symbolism more often. You might also like experimenting with using a less formal tone in your writing and a more "unpolished" style of poetry.