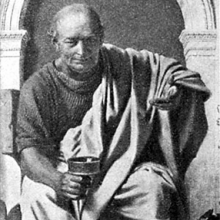 Horace was born Quintus Horatius Flaccus in Apulia, Italy, in 65 B.C. He was sent to the finest schools to study literature and philosophy. He had a brief military career that ended in defeat and him losing the family estate. He moved back to Rome and worked in the Treasury. It is believed that this is when he began writing poetry, in the hopes to recieve fame and recognition. Horace is best known for his Odes, which celebrate common events such as proposing a drink or saying goodbye to a friend as they set sail on their journey. His work influenced many later poets like Robert Frost and Alexander Pope. Horace passed away in 8 B.C. after writing his final work, Ars poetica.

When matched to Horace, it means that similarities have been found between your poetic style and the themes and literary techniques typically seen in works by this famous poet. For example, you might use assonance or alliteration in the same way that Horace does. Recognizing these similarities is important because it gives you information about the history of your poetic style, which poets might inspire you, and what writing techniques you should try next.

Try using metonymy and onomatopoeia more often. You might also like experimenting with writing lyrical poetry and odes as well as making a careful choice of diction in your writing.