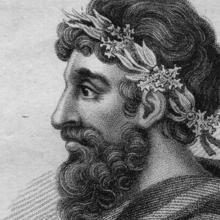 Homer was born and resided in or near Chios in the year 750 BC, although very little is known/confirmed about his personal life. Since not information is recorded on who Homer was as a person, many scholars look to his poems to reveal more about his life. For example, from the description of the blind bard in The Odyssey, many people have guessed that Homer was blind. Although Homer has been credited with writing a number of other works in additional to The Odyssey, there is much uncertainty about authorship due to lack of records. It is widely assumed that much of the poet’s work has been lost to time.

When matched to Homer, it means that similarities have been found between your poetic style and the themes and literary techniques typically seen in works by this famous poet. For example, you might use repetition or meter in the same way that Homer does. Recognizing these similarities is important because it gives you information about the history of your poetic style, which poets might inspire you, and what writing techniques you should try next.

Try using epithets and repetition more often. You might also like experimenting with using a third person perspective/point of view in your writing.