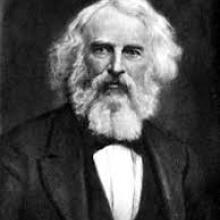 Henry Wadsworth Longfellow was born in Portland, Maine (then still part of Massachusetts) on February 27, 1807. Henry was the second son in a family of eight children and loved to read. As a child, he heard sailors speaking Spanish, French and German in the Portland streets and liked stories set in foreign places. In 1831, Henry married Mary Storer Potter and soon published his first book, a description of his travels to Europe called Outre Mer. However, in November 1835, Longfellow’s life was shaken when his wife died during a miscarriage. In 1836, Longfellow took a position at Harvard and published his first collection of poems three years later. He remarried in 1843 to Frances Appleton, a young woman from Boston, and together they had six children. In 1854, Longfellow decided to quit teaching to devote all his time to poetry and from 1866 to 1880, Longfellow published seven more books of poetry, and his seventy-fifth birthday in 1882 was celebrated across the country.

When matched to Henry Wadsworth Longfellow, it means that similarities have been found between your poetic style and the themes and literary techniques typically seen in works by this famous poet. For example, you might use simile and strong metaphor the same way that Wadsworth Longfellow does. Recognizing these similarities is important because it gives you information about the history of your poetic style, which poets might inspire you, and what writing techniques you should try next.

Try using rhyme scheme and stark contrast in tone more often. You might also like experimenting with using a formal voice to stress the importance of your words or using foreshadowing to draw in the reader.