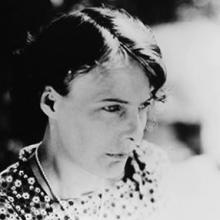 Hilda Doolittle was born in Bethlehem, Pennsylvania on September 10, 1886. Doolittle travelled to Europe in 1911, intending to spend only a summer, but remained abroad for the rest of her life. H. D. grew interested in and quickly became a leader of the Imagist movement. Some of her earliest poems gained recognition when they were published by Harriet Monroe in Poetry. H.D.'s poems did not receive widespread appreciation during her lifetime, in part because her name was associated with the Imagist movement even as her voice had outgrown the movement’s boundaries. Neglect of H. D. can also be attributed to her times, as many of her poems spoke to an audience which was unready to respond to the strong feminist principles articulated in her work.

When matched to H.D., it means that similarities have been found between your poetic style and the themes and literary techniques typically seen in works by this famous poet. For example, you might use powerful metaphor or alliteration in the same way that H.D. does. Recognizing these similarities is important because it gives you information about the history of your poetic style, which poets might inspire you, and what writing techniques you should try next.

Try using strong imagery and personification more often. You might also like experimenting with repetition and details involved with themes of femininity.