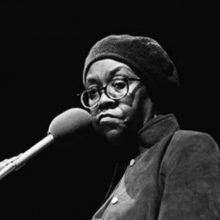 Gwendolyn Brooks was born in Topeka, Kansas, on June 7, 1917, and raised in Chicago. During the course of her life she published over 20 books of poetry including he Near-Johannesburg Boy and Other Poems (1986), Riot (1969) and Annie Allen (1949), for which she recieved the Pulitzer Prize. In the late 1960s Brooks was named the poet laureate for the state of Illinois and in 1985 sghe became the first black woman appointed as Poet Laureate to the Library of Congress. Before her death in 2000, she also won an American Academy of Arts and Letters Award, the Frost Medal, a National Endowment for the Arts Award, the Shelley Memorial Award, and fellowships from the Academy of American Poets and the Guggenheim Foundation.

When matched to Gwendolyn Brooks, it means that similarities have been found between your poetic style and the themes and literary techniques typically seen in works by this famous poet. For example, you might use alliteration or assonance in the same way that Brooks does. Recognizing these similarities is important because it gives you information about the history of your poetic style, which poets might inspire you, and what writing techniques you should try next.

Try using rhyme schemes and alliteration more often. You might also like experimenting with powerful assonance or repetition in your writing.