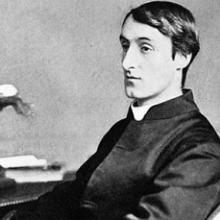 Gerard Manley Hopkins was born at Stratford, Essex, England, on July 28, 1844. He studied at Balliol College, Oxford in 1863. Inspired by the writings of John Henry Newman, Hopkins converted to Catholicism and became a priest in 1867. Hopkins burnt all of the poetry he had written to date and would not write poems again until 1875. He began writing after a shipwreck that killed 5 nuns. Hopkins poem, “The Wreck of the Deutschland,” introduced what Hopkins called “sprung rhythm.” By not limiting the number of unaccented syllables, Hopkins allowed for more flexibility in his lines and created new acoustic possibilities. He died from typhoid fever and although none of his poems were published while he was alive, his friend Robert Bridges held onto them and they were first published in 1918.

When matched to Gerard Manley Hopkins, it means that similarities have been found between your poetic style and the themes and literary techniques typically seen in works by this famous poet. For example, you might use powerful metaphor or alliteration in the same way that Hopkins does. Recognizing these similarities is important because it gives you information about the history of your poetic style, which poets might inspire you, and what writing techniques you should try next.

Try using assonance and repetition more often. You might also like experimenting with creating your own unique style using syntax and themes involving nature and religion.