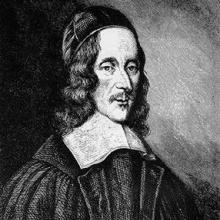 George Herbert was born in Wales, UK on April 3, 1593. He was one of ten children raised by his single mother after his father passed away when he was 3 years old. He won scholarships to Trinity College, Cambridge where he received both a BA and an MA degree. In 1620 he was elected public oratora post wherein Herbert was called upon to represent Cambridge at public occasions. He married in 1629 and shortly after became a rector in the Church of England, where he would spend the rest of his life. This is when he began to seriously write poetry, in addition to preaching and rebuilding the church. His dying wish was to have his poems published by his friend Nicholas Ferrar if he saw them helpful. He died at age 40 in 1633, and his book of poems was published that same year.

When matched to George Herbert, it means that similarities have been found between your poetic style and the themes and literary techniques typically seen in works by this famous poet. For example, you might use simile or strong imagery in the same way that Herbert does. Recognizing these similarities is important because it gives you information about the history of your poetic style, which poets might inspire you, and what writing techniques you should try next.

Try using metaphor and personification more often. You might also like experimenting with staying away from complex poetry or epic or dramatic mythmaking but instead involve themes of humility and integrity.