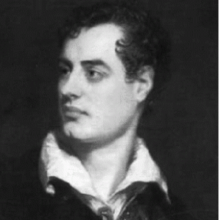 George Gordon Byron was born in Aberdeen, Scotland on January 22, 1788. His youth was filled with isolation and unhappiness. He eventually went on to study at Trinity College in Cambridge which is when he first started publishing poetry. The first, published anonymously and titled Fugitive Pieces, was printed in 1806 and contained a miscellany of poems, some of which were written when Byron was only fourteen. The reviews were mixed because it ridiculed specific teachers by name, and in part because it contained frank, erotic verses. It wasn't until much later in life he began to work on his masterpiece, Don Juan, an epic-satire novel-in-verse loosely based on a legendary hero. By the time of his death in 1824, Don Juan was yet to be finished, but 17 cantos had been written.

When matched to George Gordon Byron, it means that similarities have been found between your poetic style and the themes and literary techniques typically seen in works by this famous poet. For example, you might use alliteration or strong metaphor in the same way that Byron does. Recognizing these similarities is important because it gives you information about the history of your poetic style, which poets might inspire you, and what writing techniques you should try next.