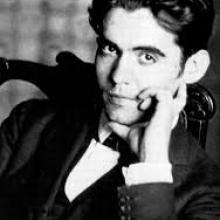 Federico Garcia Lorca was born in Fuente Vaqueros, a small town a few miles from Granada on June 5, 1898. In 1919, Lorca published his first book, Impresiones y Viajes,and he traveled to Madrid, where he remained for the next decade. In 1922, Lorca and the composer Manuel de Falla organized the first cante jondo, or “deep song,” festival in Granada; Lorca also became part of a group of artists known as Generación del 27, which included Salvador Dalí and Luis Buñuel, who exposed Lorca to surrealism. In 1929 and 1930, Lorca traveled to New York City and Cuba. He was arrested in Granada on August 16, 1936, near the beginning of the Spanish Civil War and is believed to have been murdered by Fascist forces on August 18 or 19, 1936.

When matched to Federico Garcia Lorca, it means that similarities have been found between your poetic style and the themes and literary techniques typically seen in works by this famous poet. For example, you might use rhyme scheme and strong metaphor the same way that Lorca does. Recognizing these similarities is important because it gives you information about the history of your poetic style, which poets might inspire you, and what writing techniques you should try next.

Try using allusion and repetition more often. You might also like experimenting with symbolism and personification using elements with themes of death, tragedy, and love.