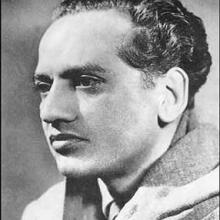 Faiz Ahmed Faiz was born in Sialkot, India, which is now part of Pakistan, on February 13, 1911. He had a privileged childhood and his father was a sucessful lawyer. He received a Bachelor’s degree in Arabic, followed by a master’s degree in English, from the Government College in Lahore in 1932. He began a career teaching shortly after getting his second masters degree in Arabic from the Oriental College in Lahore. He married Alys George and had 2 daughters while writing his early poetry works. In 1942, he left teaching to join the British Indian Army, for which he received a British Empire Medal for his service during World War II. After her service, he became an editor of The Pakistan Times. In 1951 he was sentenced to prision due to a failed coup attempt. He wrote two poetry collections that revolved around his experience in jail. After his release he went back to teaching and editing, passing away in Lahore in 1984, shortly after receiving a nomination for the Nobel Prize.

When matched to Faiz Ahmed Faiz, it means that similarities have been found between your poetic style and the themes and literary techniques typically seen in works by this famous poet. For example, you might use metaphor or imagery in the same way that Faiz Ahmed Faiz does. Recognizing these similarities is important because it gives you information about the history of your poetic style, which poets might inspire you, and what writing techniques you should try next.

Try using flashbacks and symbolism more often. You might also like experimenting with using dramatic tone shifts in your writing.