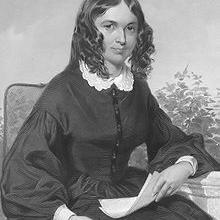 Elizabeth Barrett Browning was born at Coxhoe Hall, Durham, England in 1806. Elizabeth was the oldest of twelve children and was educated at home; before the age of ten Elizabeth had read passages from Paradise Lost and a number of Shakespearean plays, among other great works. At twelve years old, Browning had written her first “epic” poem, which consisted of four books of rhyming couplets. At the age of fourteen, Elizabeth developed a lung ailment that plagued her for the rest of her life. Throughout her teenage years, she became active in the Bible and Missionary Societies of her church and in 1826, Elizabeth anonymously published her collection An Essay on Mind and Other Poems. In 1861, Elizabeth Barrett Browning died in Florence on June 29.

When matched to Elizabeth Barett Browning, it means that similarities have been found between your poetic style and the themes and literary techniques typically seen in works by this famous poet. For example, you might use powerful allusion and strong simile the same way that Browning does. Recognizing these similarities is important because it gives you information about the history of your poetic style, which poets might inspire you, and what writing techniques you should try next.

Try using repetition and imagery more often. You might also like experimenting with emphasizing deep feelings and including themes of love and loss in your works.