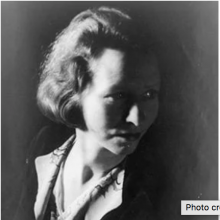 Edna St. Vincent Millay was born in Rockland, Maine, on February 22, 1892. In 1912, at her mother’s urging, Millay entered her poem “Renascence” into a contest; she won fourth place and publication in The Lyric Year, bringing her immediate acclaim and a scholarship to Vassar College. The year she graduated in 1917, Millay published her first book, Renascence and Other Poems. She also wrote her first verse play, at the Vassar's drama deparment, called The Lamp and the Bell (1921), a work about love between women. After college, she moved to New York City where she would go on to publish A Few Figs from Thistles in 1920, a volume of poetry which drew attention for its controversial descriptions of female sexuality. She married married Eugen Boissevain— their marriage lasted 26 years until Boissevain's death in 1949, followed by Millay's passing only a year later.

When matched to Edna St. Vincent Millay, it means that similarities have been found between your poetic style and the themes and literary techniques typically seen in works by this famous poet. For example, you might use similes and strong imagery the same way that Millay does. Recognizing these similarities is important because it gives you information about the history of your poetic style, which poets might inspire you, and what writing techniques you should try next.

Try using more detailed imagery and similies more often. You might also like experimenting with tone that is more romantic or filled with passion.