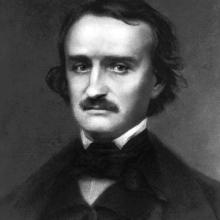 Edgar Allan Poe was born in Boston Massachusetts on January 19, 1809. Before Poe was three years old both his parents died leaving him to be raised in Richmond, Virginia with John and Frances Allan. Poe excelled academically at the University of Virginia but was forced to leave when he refused to pay for John Allan's gambling debts. In 1827, he moved to Boston and enlisted in the United States Army and in 1836, he married Virginia who died from tuberculosis in 1847. After her death his perpetual depression and alcoholism worsened and he died on October 7, 1849 of “acute congestion of the brain" which recent medical practitioners classified as rabies.

When matched to Edgar Allan Poe, it means that similarities have been found between your poetic style and the themes and literary techniques typically seen in works by this famous poet. For example, you might use dark imagery or powerful metaphor the same way that Poe does. Recognizing these similarities is important because it gives you information about the history of your poetic style, which poets might inspire you, and what writing techniques you should try next.

Try using imagery, alliteration, and metaphor more often. You might also like experimenting with powerful onomatopoeia and mysterious or dismal topics.