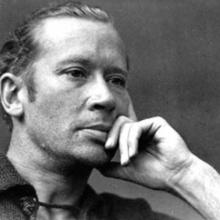 Edward Estlin Cummings was born in Cambridge, Massachusetts, on October 14, 1894. Cummings began writing poems as early as 1904 and studied Latin and Greek at the Cambridge Latin High School. He attended Harvard University and received his BA in 1915 and his MA in 1916; his studies there introduced him to the poetry of avant-garde writers, such as Gertrude Stein and Ezra Pound. In 1917, Cummings left the United States for France as a volunteer ambulance driver in World War I. At the time of his death, in autumn of 1962, he was the second most widely read poet in the United States, after Robert Frost.

When matched to E. E. Cummings, it means that similarities have been found between your poetic style and the themes and literary techniques typically seen in works by this famous poet. For example, you might use powerful simile and strong imagery the same way that Cummings does. Recognizing these similarities is important because it gives you information about the history of your poetic style, which poets might inspire you, and what writing techniques you should try next.