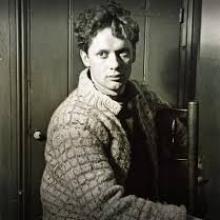 Dylan Marlais Thomas was born in Swansea, South Wales on October 27, 1914. Thomas' father was an English Literature professor at the local grammar school and Thomas loved the sounds of nursery rhymes, foreshadowing his love for the rhythmic ballads of Gerard Manley Hopkins, W. B. Yeats, and Edgar Allan Poe. Thomas dropped out of school at sixteen to become a junior reporter for the South Wales Daily Post. By December of 1932, he left his job at the Post and decided to concentrate on his poetry full-time. In 1934, Thomas moved to London, won the Poet’s Corner book prize, and published his first book, 18 Poems which gained large success and began a habit of alcohol abuse for Thomas. Almost 20 years later, on November 9, 1953, Thomas died at St. Vincent’s Hospital in New York City at the age of thirty-nine.

When matched to Dylan Thomas, it means that similarities have been found between your poetic style and the themes and literary techniques typically seen in works by this famous poet. For example, you might use powerful alliteration and strong metaphor the same way that Thomas does. Recognizing these similarities is important because it gives you information about the history of your poetic style, which poets might inspire you, and what writing techniques you should try next.

Try using simile and vivid imagery more often. You might also like experimenting with symbolism and themes involving family, loss, and innocence.