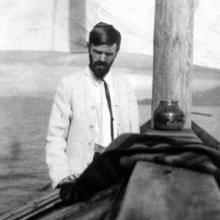 David Herbert Lawrence was born in Eastwood, Nottinghamshire, England, on September 11, 1885. Lawrence’s first-published works in 1090 were poems, depsite being better known as a novelist. Lawrence was a rebellious and profoundly polemical writer with radical views, with one of his poetry collections, Pansies, banned on publication in England. Due to war time troubles, Lawrence traveled all around the globe from Germany to Ceylon, Mexico and the United States.

When matched to D.H. Lawrence, it means that similarities have been found between your poetic style and the themes and literary techniques typically seen in works by this famous poet. For example, you might use powerful metaphor or alliteration in the same way that Lawrence does. Recognizing these similarities is important because it gives you information about the history of your poetic style, which poets might inspire you, and what writing techniques you should try next.

Try using strong imagery and personification more often. You might also like experimenting with melancholic and nostalgic tones involving themes of nature and religion.