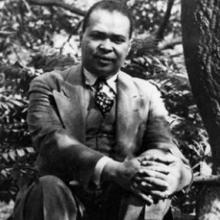 Countee Cullen was born Countee LeRoy Porter in Louisville, Kentucky on May 30, 1903. When he was 15 he was unofficially adopted by F. A. Cullen, the minister of a Methodist church in Harlem. Cullen atteded both high school and college in New York City. It was around this time his first poems were published in major publications like Harpar's and Poetry Magazine. He success continued when he was admitted to Harvard University to complete an MA in English. He published several more poetry collections in the years following his graduation. He taught in New York City public schools for 12 years beginning in 1934 until he died on January 9, 1946.

When matched to Countee Cullen, it means that similarities have been found between your poetic style and the themes and literary techniques typically seen in works by this famous poet. For example, you might use allusions or imagery in the same way that Cullen does. Recognizing these similarities is important because it gives you information about the history of your poetic style, which poets might inspire you, and what writing techniques you should try next.

Try using vivid imagery and allegory more often. You might also like experimenting with writing in traditional formal structures, but not writing about traditional topics.