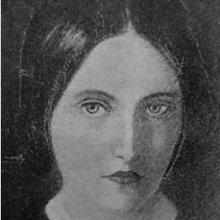 Christina Rossetti was born in London on December 5, 1830. In 1850, under the pseudonym Ellen Alleyne, she contributed seven poems to the Pre-Raphaelite journal The Germ, which had been founded by her brother William Michael and his friends. Rossetti’s best-known work, Goblin Market and Other Poems, was published in 1862. By the 1880s, recurrent bouts of Graves’ disease, a thyroid disorder, made Rossetti an invalid, and ended her attempts to work as a governess. While the illness restricted her social life, she continued to write poems. In 1891, Rossetti developed cancer, of which she died in London on December 29, 1894.

When matched to Christina Rossetti, it means that similarities have been found between your poetic style and the themes and literary techniques typically seen in works by this famous poet. For example, you might use repetition and strong imagery the same way that Rossetti does. Recognizing these similarities is important because it gives you information about the history of your poetic style, which poets might inspire you, and what writing techniques you should try next.

Try using rhyme scheme and symbolism more often. You might also like experimenting with tone that is dramatic and amplified with intense feeling.