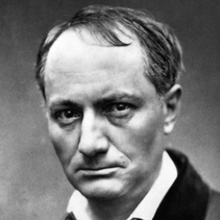 Charles Baudelaire was born in Paris on April 9, 1821. After he failed to graduate a military boarding school, Baudelaire moved to Paris' Latin Quarter and tried to persue a career as a writer while he accumulated large amounts of debt. After a quick trip to India, he was welcomed back in Paris by a large inheritance that allowed him to live luxuriously, but quickly spent half of his money. To supplement his income, Baudelaire wrote art criticism, essays, and reviews for various journals. His first publications of poetry also began to appear in journals in the mid-1840s. In 1854 and 1855, he published translations of Edgar Allan Poe, whom he called a “twin soul," and they were widely acclaimed. He died on August 31st, 1867.

When matched to Charles Baudelaire, it means that similarities have been found between your poetic style and the themes and literary techniques typically seen in works by this famous poet. For example, you might use alliteration or strong metaphor in the same way that Baudelaire does. Recognizing these similarities is important because it gives you information about the history of your poetic style, which poets might inspire you, and what writing techniques you should try next.

Try using simile and symbolism more often. You might also like experimenting with irony involving themes of violence, death, and scandal.